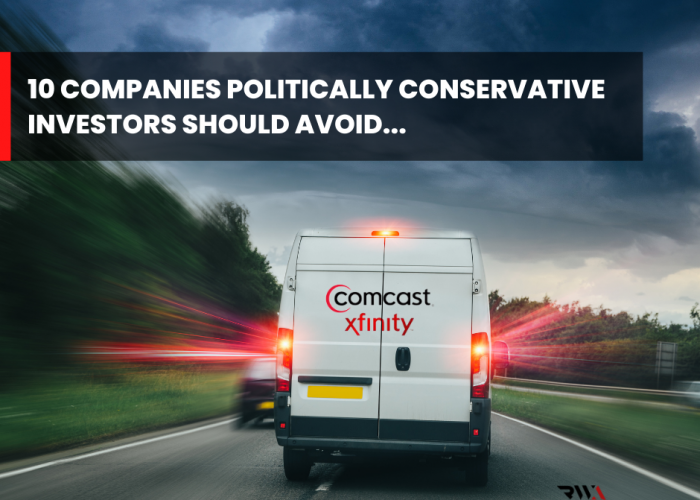 Rubin Wealth Advisors, in conjunction with American Conservative Values Fund has identified the ten worst companies for political conservatives (or patriots) to invest in. Investors can’t completely avoid placing their funds into all woke companies, but they can avoid investing in the worst offenders.

Philadelphia-based Comcast Corporation (NASDAQ: CMCSA) is far more than just “Wokeness, the Cable Guy.” The company once known almost exclusively for hooking up cable TV in your home, and then providing you with years of increasing bills and decreasing service quality, is now controlling everything from the programming you receive through your cable service (NBC, Telemundo, Sky, and Peacock), to the internet you are using to work from home, to your vacations with your children (Comcast operates the Universal Studio theme parks).

Much like SpongeBob SquarePants a show easy to locate somewhere almost 24/7 on Comcast cable, the entertainment conglomerate is everywhere you look.

So are their very woke corporate policies, the effects of which, unlike their television service, cannot simply be turned off by pressing a button on your remote. Comcast has been terrorizing traditional American sensibilities for well-over a decade and are doing so at an ever-increasing rate.

On June 8th, 2020, not long after the George Floyd incident, Comcast CEO Brain Roberts announced that it was Comcast to the rescue with a $100 million social justice war chest. His statement read in part:

To that end, we are developing a comprehensive, multiyear plan to allocate $100 million to fight injustice and inequality against any race, ethnicity, gender identity, sexual orientation or ability. There will be $75 million in cash and $25 million in media that will be distributed over the next three years, in addition to the existing commitments our company currently makes to thousands of organizations…

Forget for a moment (check that; don’t forget) that Comcast is supposed to be in the entertainment business. Setting aside $100 million of funds in a publicly traded company in order to “fight injustice and racial inequality” is fiscally irresponsible and a violation of its fiduciary duty to maximize shareholder value. There is no shareholder ROI associated funding most woke activities. Like, go woke, go broke.

It is also important to keep in mind that Comcast’s idea of fighting injustice and addressing racial inequality just might not jibe with what conservative’s feel is appropriate with regard to those issues. Woke companies tend to be among the worst when it some to selective moral relativism.

An example of that kind of disconnect can be found in the program that Comcast started during the pandemic when they offered “RISE grants” to business that were harmed by the lockdowns and other measures imposed to fight the Chinese coronavirus. In their very woke statement explaining the program, Comcast declared that it was just to help women and minority-owned businesses, a statement that essentially implies that if you are a white male business owner, you weren’t hurt by the pandemic, or if you were you probably had it coming.

The discriminating nature of their program led lawsuits being filed by some businesses, including one by Christopher Moses, an Indianapolis-based owner of a commercial cleaning service. In a WSJ editorial, Mr. Moses wrote of the RISE program:

The discriminating nature of their program led lawsuits being filed by some businesses, including one by Christopher Moses, an Indianapolis-based owner of a commercial cleaning service. In a WSJ editorial, Mr. Moses wrote of the RISE program:

While part of Comcast’s woke racial polices might just be a little CYA after their being sued previously by Byron Allen for discrimination and a group of Chicago employees, their ongoing efforts in programming and theme park management indicate that their heart really is in this culture war battle.

Recently, NBC News refused to cover the BLM purchase of a $6 million California mansion. This despite the fact that Comcast has been squarely behind BLM-type initiatives. NBC has been known for covering up news stories that do not support progressive narratives. The BLM “non-story” in April is just the latest example of their not letting facts get in the way of promoting their agenda.

Primetime programming is notoriously woke, with their long running series “Law & Order-SVU” perhaps being the grey-haired lady of wokeness, having introduced progressive themes into their weekly scripts long before the term “woke” was coined.

Finally, at Universal Orlando Resort, their Suess Landing area may not be fully reopened, in part owing to their “If I Ran the Zoo” playground which is derived from the book of the same title that allegedly contains, “offensive stereotypes.” Comcast is going on beyond woke in targeting the most prolific children’s author in American history.

Comcast has demonstrated that it has all the bandwidth needed to wire your home with every sort of woke cause that can be conceived. As a conservative investor, not only are their values offensive, but their recklessness with funds should also be concerning. Every dollar spent on woke initiatives is a dollar taken away from your potential return.

Change the financial channel and invest your dollars somewhere other in Comcast Corporation. While they might be down-streaming content into your home, there is no reason for you to be upstreaming hard earned dollars into their corporate coffers.