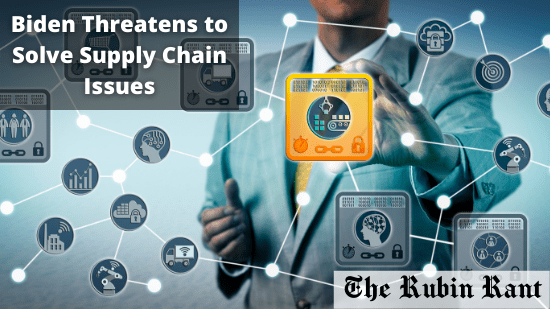 Even with Joe Biden administration supply chain issues piling up. In his State of the Union Speech, he took credit for improving a few things inside the American economy that simply don’t pass the test of even a cursory fact check.

First, he talked about the number of jobs added in the economy last year as being a record 6.5 million.  While that number is true, he ignored that fact that 9.5 million jobs were lost in the prior year due to the panic over the pandemic.  Fewer people are working today than were during the boom years of the Trump Presidency.

Biden then mentioned that manufacturing jobs had increased by 359,000 last year.  Unfortunately, according to data from his Bureau of Labor Statistics, that number was only 179,000 and, like the overall jobs number, fails to account for manufacturing jobs at pre-pandemic levels (note: the page with the DOL statistics has been temporarily taken down as of this writing).

Let’s give Uncle Joe the benefit of the doubt and assume that he just doesn’t understand economics as opposed to the inescapable alternative, that being he is simply lying. In generously presuming the ignorance of the President, let’s turn our attention to the much discussed, little understood, supply chain crisis and what government should, and shouldn’t, do about it.

Any businessperson has an almost inherent understanding of what the term “supply chain” means and what its function is in pathing the final delivery of goods and services to American citizens, for whom economics has created alternate terms of art in “ultimate consumer” or “end user.” While businesspeople understand the meaning of supply chain, they also understand that the supply chain itself is extraordinarily complex and not something that can be controlled by government in the manner that socialists like Joe Biden and his team tend to prefer.

Said differently, the socialists inside the Biden administration might be able to centrally manage and plan Uncle Joe’s day, but they can’t replicate the process for the supply chain.  Only market mechanisms can build an effective supply chain and in order for those mechanisms to work, government has to stay out of the way.

Which brings us to the comedy-noir document released by the White House on February 24 titled, “The Biden-⁠Harris Plan to Revitalize American Manufacturing and Secure Critical Supply Chains in 2022.”  The report starts by creating a nifty acronym for Biden’s team designed to centrally manage the supply chain, the SCDTF or Supply Chain Disruptions Task Force (The acronym’s absence of vowels makes me wonder if it was originally written in Hebrew).