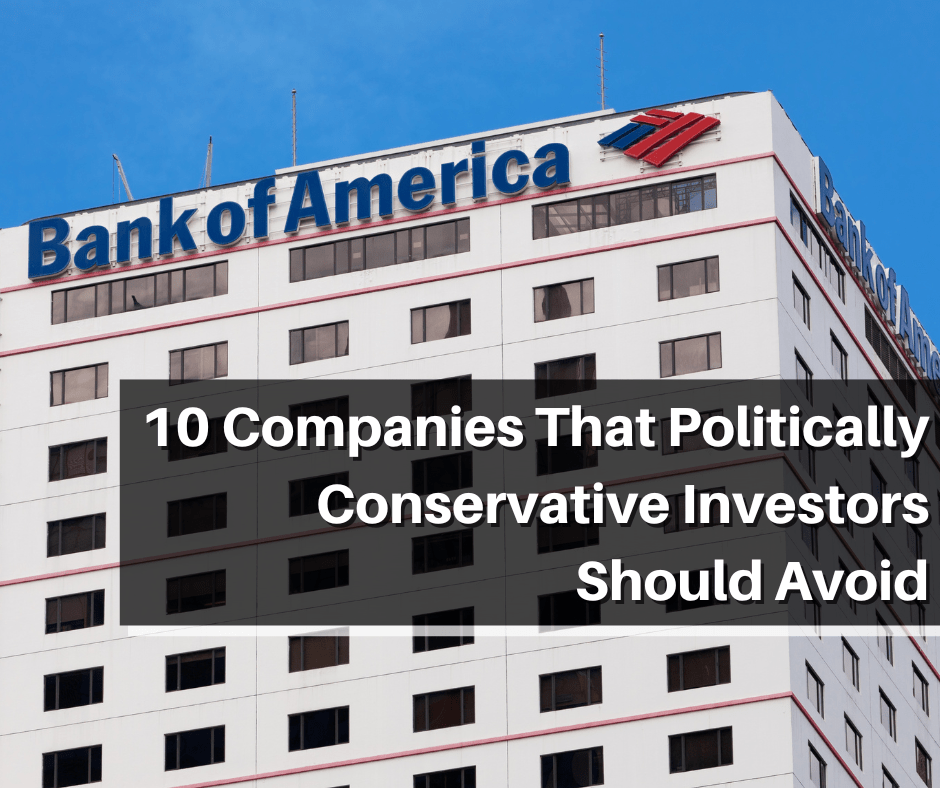 Bank Of “America” Is Anything But

Rubin Wealth Advisors, in conjunction with American Conservative Values ETF (ACVF) has identified the ten worst companies for political conservatives (or patriots) to invest in. Investors can’t completely avoid placing their funds into all woke companies, but they can avoid investing in the worst offenders.

We typically think of government and business as competing, adversarial sides in the United States. The concept of “good guys” and “bad guys” is oversimplified, but people like it. Socialism sees government as good and business as bad, while conservatism sees the opposite.

What role does the bank, America’s financial middleman, play in a binary paradigm? For the past few decades, the answer has been easy. With very few exceptions, banks and bankers are agents of the government because of their highly regulated operations and the consolidation in the industry over the past 20 years. Merrill Lynch, and its wholly-owned subsidiary Bank of America, Corp (NYSE-BAC), are more zealous agents.

Being an agent of the government in these times means being an agent of wokeness. Bank of America made it to near the top (or bottom if you look at it that way) of our list of companies in which conservatives should not invest because they are fully woke in every possible way. It has impacted their external and internal practices, and they do not even pretend to hide it.

Start with their woke policies to try to support the Marxist-inspired climate agenda. You don’t have to look at what outsiders are saying about BOA in this area, and you can just go right to the company’s website:

Building on our longstanding support for the Paris Climate Agreement, we have a goal to achieve net-zero greenhouse gas (GHG) emissions in our financing activities, operations, and supply chain before 2050. Our Environmental Business Initiative will deploy and mobilize $1 trillion by 2030 to accelerate the transition to a low-carbon, sustainable economy as part of a broader $1.5 trillion sustainable finance goal aligned to addressing the United Nation’s Sustainable Development Goals (SDGs). Our multi-year financing commitment provides financial capital, along with significant intellectual capital, to develop solutions to climate change and other environmental challenges.

To make certain you don’t miss the significance of this, BOA is going to
deliberately lend money to support a Marxist agenda. They will pick winners and losers in the marketplace based upon their willingness to fall in line with the World Economic Forum and the Paris Climate Accords as opposed to just looking at the overall strength of the company borrowing money. This is centralized planning. This is the government controlling us dressed in an often ill-fitting blue pinstriped suit.

Switching from geographic climate to human climate, BOA has instituted employee training for the purpose of integrating critical race theory ideas into their corporate environment. As was reported in the New York Post last year, BOA has encouraged to get “woke at work,” and to that end, has created a curriculum that includes teaching how white supremacy ideas can be found even in preschool-age children:

In the first day of the training, Bank of America teaches employees how race is used to establish and justify systems of power, privilege, and discrimination.

The training program illustrates that white people live with white-skin privileges regardless of their socioeconomic status. White toddlers are implicated in white supremacy by age 3 to 5 and must be actively taught to reject white privilege smog.

Bank of America immerses employees in full-spectrum CRT, not least framing all white people as oppressors and all racial minorities as irreproachable. “Racism in America idolizes white physical features and white values as supreme over those of others,” the program says. As a result of being part of the “dominant culture,” whites are more likely to “have a more limited imagination,” “experience fear, anxiety, guilt or shame,” “contribute to racial tension, hatred, and violence,” and “react in broken ways.”

Ironically, BOA has decided to officially hate White people considering that it was originally formed by Italian immigrants who were hated and unable to get bank
credit.

This is the nation’s 2nd largest bank controlling over $2 trillion in assets,
deliberately creating an internal culture of hatred all the while they are attempting to virtue signal. It is perhaps the most egregious example of the pure evil of corporate wokeism that can be pointed to within any major U.S. Corporation.

Then again, BOA is not much more than an extension of the federal government. Their C-suite and HR people come to work daily wearing a bracelet that says WWBD? (What Would Biden Do).

Not content to stop with CRT, BOA also announced in 2019 that it would dedicate$1.25 billion of investment into minority programs in response to what has been a fabricated narrative about increased hate crimes against Asians. In making the announcement, BOA explained the decision by writing:

The urgency we feel to address longstanding issues of inclusion and
racial inequality has only increased following the attacks and hate
speech directed at Asian people over the last year,” said Bank of
America Chairman and CEO Brian Moynihan. “Across the public and
private sectors, it is clear that we must do more – to take action, help
others convene, and serve as a catalyst for a broad-based, collective
response to the critical issues affecting our nation.”

These examples illustrate BOA’s woke practices regarding climate and race, either one of which on their own would be a good reason for conservatives to steer their investment dollars in a different direction. When taken together, they make an irrefutable argument to “walk away from BOA (catchy?).”

BOA Stepping into the Woke Realm

BOA also has stepped into the woke realm by making it clear that they want people to be able to enter this country illegally. Perhaps this is profit-driven as they might want to charge fees for low-wage illegal workers cashing their paychecks, or perhaps it is just more virtue signaling.

Fox News reported in 2019 that BOA was going to divest in companies that provided private prison and immigration detention services to the federal government and to states and counties. These firms have been objected to by pro-illegal immigration groups because, well, they detain people entering the country illegally.

If I have this straight, BOA first teaches its citizen employees to hate themselves and each other, but then it tells everyone that they love people who aren’t citizens? Confusing? Not to BOA executives. They know exactly what they are doing. They are trying to divide and dilute our country so they can more easily conquer it.

For a conservative investor, BOA is no longer worth their money. This organization is as sinister as one can possibly be. BOA might be “too big to fail” financially, but they have not been too big to fail as an American corporation. They and the people that work for them are a disgrace.
They are not worthy of your dollars. Make one final withdrawal from BOA stock and close your account.

Ps. Note BOA owns Merrill Lynch. That means if you make your trade to divest in BOA stock using your Merrill account, you are still making money for BOA on the exit. Best to close that account, too. I know just where you can go for an orderly transition.