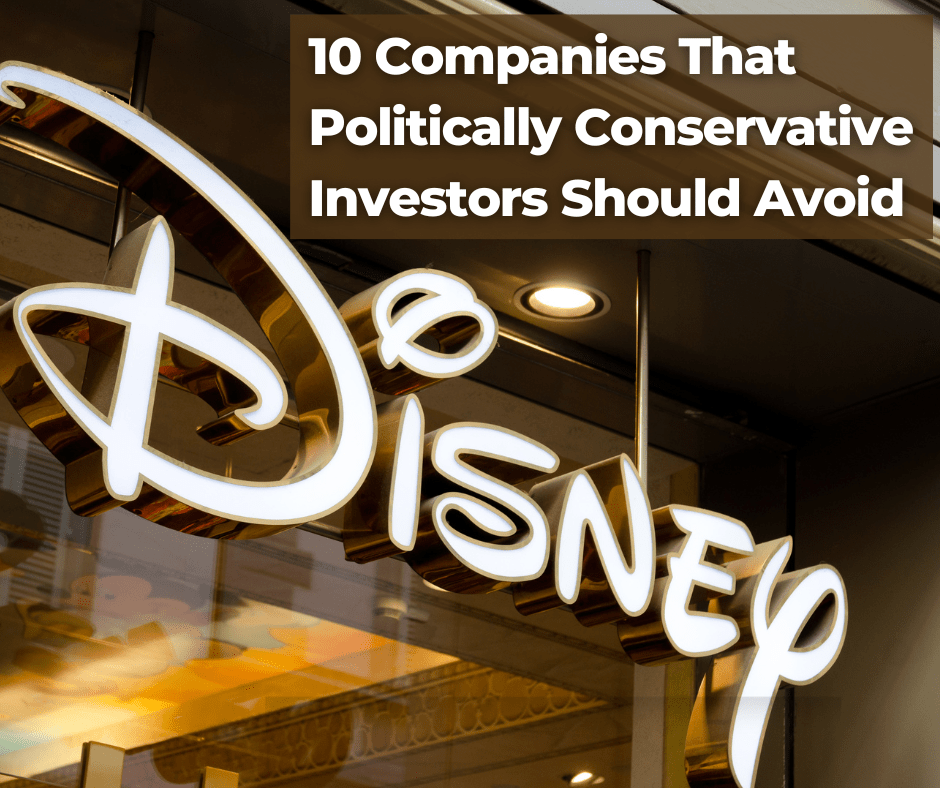 Rubin Wealth Advisors, in conjunction with American Conservative Values ETF (ACVF) has identified the ten worst companies for political conservatives (or patriots) to invest in. Investors can’t completely avoid placing their funds into all woke companies, but they can avoid investing in the worst offenders.

Let’s get to #1 Disney Stock

Republican, tweeted back in June. Lightyear, Disney-Pixar’s latest film release, was by all accounts a total box office failure. In week two, the film brought in only $18 million, down from $50 million on its first weekend.

Why did the Toy Story spinoff do so poorly? Fans are probably waiting for its streaming release because Disney does not market it well.

Conservatives have a different idea. For us, we see the discontent with Disney’s anti-traditional, anti-American messaging starting to hit it in the corporate wallet. It’s an excellent start to what needs to become a trend.

Chris Evans replaces Tim Allen’s iconic voice with the ultra-woke, American-hating Captain of the Lightyear film. It is designed for children but contains a kiss between a gay couple.

It appears that the movie-going public isn’t too fond of Disney’s choices. (Top Gun – Maverick has proved that; Americans just don’t go to that movie because of the China flu).

According to the Independent Sentinel:

“As the mother [of] one transgender child and one pansexual child,” she supports having “many, many, many LGBTQIA characters in our stories” and wants a minimum of 50 percent of characters to be LGBTQIA and racial minorities

Disney has been a long-time and very bold leader of the woke corporate movement. Not only do they have a history of wokeness, but even now, as blowback has begun against woke corporate culture and actions, causing some companies to either step back a bit or at least slow down, Disney has doubled down on their wokeness. It is as if they are saying, “We are Disney. You need us so much you can’t possibly turn away from us no matter what we say or do.”

The entertainment giant’s spread of wokeness is so expansive it is challenging to know where to begin. If you want recent, on June 30 th three former Disney employees filed suit alleging they were fired from the company for not wearing masks and refusing to get vaccinated for religious reasons during the pandemic. The employees objected to the vaccination because fetal stem cells were used in its development. Despite Florida state law to the contrary, which prohibits the forced imposition of vaccines upon employees, Disney simply pulled down its corporate mask and spit into the eye of the employees and the state.

Disney intro is now: WELCOME DREAMERS OF ALL AGES aka illegal immigrants!

The well-known introductory refrain of Disneyland and Disneyworld has been changed from “Ladies and gentlemen, boys and girls…” to “Welcome dreamers of all ages”. (I am assuming by “dreamers” they meant people who enter the country illegally). This was part of their new “Diversity & Inclusion” policy designed to encourage hate under the guise of love. Yahoo News reported at the time of the welcome-language change:

“Inclusion is essential to our culture and leads us forward as we continue to realize our rich legacy of engaging storytelling, exceptional service, and Disney magic,” Josh D’Amaro, chairman of Disney Parks, Experiences and Products, wrote in an April blog post on the company’s website. “We want our guests to see their backgrounds and traditions reflected in the stories, experiences, and products they encounter in their interactions with Disney,” he continued. “And we want our cast members—and future cast members—to feel a sense of belonging at work.”

I apologize if the preceding just made you throw up in your mouth.

Despite its flowery language, it’s always about what sort of specific actions are spawned from this script, not what sort of random decisions are taken. In Disney’s case, it means the denial of biology, same-sex couples kissing in children’s films, and, of all things, a ‘lady Thor.”

Having lived in Florida for over 50 years, Disney World’s outright lies disgusted me.  Earlier this year, when Florida Governor Ron DeSantis signed into law a bill that restricts the teaching of sexual content to children in kindergarten through third grade, Disney joined into the openly deceitful movement of characterizing the law as a “don’t say gay” piece of legislation. A company that reaches out to young children opposes a law banning sex education.

I’ll leave that one up to you to answer.

Disney is typically self-righteous, especially when it is a for-profit business.

The company that is so concerned about people being treated fairly isn’t quite as concerned when it comes to China. This was evident when Disney filmed some scenes in the live-action remake of Mulan in China. A brutal repression campaign was conducted by the Chinese government in the province where the filming took place against the Muslim Uighur people. The movie’s end credits mention it was partly filmed in Xinjiang, but no one noticed until some viewers posted on the internet.

Mulan’s end credits include a special thank-you to the Turpan Municipal Bureau of Public Security, according to a screenshot from the movie. The city of Turpan, which is located in the northwestern Xinjiang region, runs a concentration camp for Uyghur Muslims where detainees are forced to recite Communist Party propaganda, according to a 2018 investigation by The Wall Street Journal.

Even the Washington Post, itself an anti-American rag typically supportive of Disney-style wokeness, was critical of Disney for this one

“Why did Disney need to work in Xinjiang? It didn’t.

In addition to China, there are many countries around the world that offer the same breathtaking mountain scenery. In doing so, Disney normalizes a crime against humanity,” said Asia Society senior fellow Isaac Stone Fish.

Disney stock has worked hard to reach the “top” of a bottom-of-the-barrel list of corporate wokeness. Not only does this company not deserve your investment dollars, it doesn’t deserve any! Divest your stock, buy different toys, vacation in Clearwater instead of Orlando, and go see Top Gun – Maverick!